Seeing a couple or many of Thailand’s wats (temples) is pretty well considered a compulsory part of the Southeast Asia experience. Visiting temples in Thailand can also be an exceptionally enjoyable experience, especially if you can look around without fear of committing some cultural infraction.

Don’t worry: Unless you really screw up, there is very little chance of getting tossed out by angry monks.

Thailand has over 33,000 active Buddhist temples; many more temples exist as ruins waiting to be restored or preserved as archaeological sites. Just as cathedrals are often the centerpieces of medieval cities in Europe, the temples in Thailand are an integrated, inescapable part of the culture. You may as well learn how to enjoy them properly without committing a faux pas.

Even better, since visiting temples in Thailand is a free or inexpensive (usually) thing to do, you can see many without destroying your backpacking budget!

The Buddhism Tradition in Thailand

More than 94 percent of religious people in Thailand follow the Theravada branch of Buddhism. Theravada is the same school followed by much of Southeast Asia and Sri Lanka.

Japan, China, and Korea generally follow the Mahayana branch of Buddhism which has a different set of traditions. The Vajrayana tradition of Buddhism is prevalent in Tibet, Nepal, and Mongolia.

The rules of etiquette for visiting Buddhist temples vary between the different schools. These guidelines apply to the Theravada tradition in Thailand.

The sacred Buddha statues inside the temple (there can be more than one) are most often symbolic representations of Siddhartha Gautama who lived and died between the 6th and 4th centuries B.C.

Saying something to the effect of “the Buddha is in that room” is incorrect unless you’re referring to someone who has obtained buddhahood!

A few temples in Thailand strictly enforce proper attire; however, like usual, tourists are extended a little more forgiveness.

Famous temples such as Wat Phra Kaew inside the Grand Palace in Bangkok require that visitors dress appropriately. In a pinch, men and women alike can just cover legs with a sarong. Sarongs are often available for rent or loan at the entrance.

Just use common sense for choosing clothing to wear when visiting temples in Thailand. The general rule of thumb is to dress cleanly and conservatively for temple visits. Forgo those Full Moon Party shirts still stained with blood and body paint. Leave the sleeveless shirts and beachwear at your hotel!

Other Ways to Clean Up

When Entering the Prayer Hall

Relax. If you aren’t Buddhist, there is no need to bow, prostrate yourself, or do anything other than be quiet and respectful.

Much to the surprise of visiting Westerners, monks are often spotted using smartphones in Thailand. I’ve seen them checking email and playing online games in internet cafes, too. This may not click with the “Hollywood” version of Buddhism many tourists are expecting, but it is the modern reality.

That said, silence your phone when you enter a temple! Don’t take a chance of it interrupting the tranquility or disturbing anyone.

Wait until you are outside of the worship area before posting those new photos or checking messages. Instead, stay present, and enjoy the setting for a minute.

Unless a sign is posted, taking photos inside Thai temples is perfectly fine. Taking photos of worshipers is not nice. Even worse, taking a selfie with a Buddha statue is really bad Thai temple etiquette—don’t do it!

Running around the temple grounds stalking monks for photos isn’t very nice, either. Unique photo opportunities abound, but try to resist. The monks and nuns live there. Taking photos of them doing chores, washing laundry, eating, or performing other activities makes them into a spectacle within their own home.

Note: The etiquette for taking photos inside Buddhist temples varies by country. For instance, taking photos is forbidden inside of many temples in Japan.

Don’t walk in front of people who are bowing or prostrating themselves. In general, avoid being between the worship floor and the statue of Buddha so that you don’t unknowingly block worshipers who may be in a hurry.

If a monk is seated, try not to pass by in an upright position. You should not be higher than a monk. The Buddha statue will generally be a little elevated off the ground.

Other Don’ts for Visiting Temples in Thailand

At any given time, there are between 200,000 – 300,000 monks wandering around Thailand. Spending time (usually three months) as a monk was once compulsory for young men before they turned 20. Today, there are various deferments to this rule. Also, there are some requirements before someone can become ordained. Men can become disqualified for monkhood.

Having served as a monk looks good on a young man’s “life resume.” They are more sought after as partners and husbands. Young men who ordain as monks bring more merit to their family, particularly their mother and sisters who cannot become ordained.

The monks you see on your trip may or may not be monks next year. A few will embrace the monastic life and remain in service, however, a vast majority will integrate back into Thai society. Regardless, monks are held in high regard throughout Thailand. Always show respect (e.g., give them space, be willing to give up your seat, etc).

Vassa or Buddhist Lent in Thailand

Interestingly, since many young men often go into monkhood after graduation, there is a monk “season.” Many new monks are ordained during ceremonies in April, so the monkhood season coincides with school holidays between April and June.

During Vassa (known as Phansa in Thailand), Theravada monks must remain at their monasteries and not travel. Although this stretch of three months is often referred to as “Buddhist Lent,” it predates the Christian tradition by centuries!

The start and end dates for Vassa are based on the moon and change annually, however, the event occurs during Thailand’s rainy season between July and October.

During the three lunar months of Vassa, you may see monks performing their alms procession in the mornings or walking around the temples. You won’t see as many on public transportation or moving from place to place.

How to Show Respect to Monks

Assuming you aren’t acting like an obnoxious tourist, monks are generally friendly. Many welcome interaction and a chance to speak with foreigners. The younger ones are shy and genuine, while the older ones can be cheeky and direct. Either way, there is a lot of potential for a fun cultural interaction  — take advantage!

Note: A few temples around Thailand host Monk Chats where tourists are invited to sit with monks and ask questions about Buddhism. Monk Chats are an interesting cultural experience in Chiang Mai.

When interacting with monks, women should never touch a monk or his robes. Even brushing their robes in passing causes them to need to undergo a cleansing ritual.

When handing something to a monk (e.g., paying for a trinket sold to support the temple), put it down and allow them to pick it up.

Even a monk’s own mother cannot touch him while he is ordained!

It’s definitely a real thing. Visiting too many temples in Thailand within a short span will lessen your appreciation of them — particularly if you don’t know the history or traditions.

Each temple is unique in some way. You can always visit temples spontaneously, but taking 10 minutes beforehand to read about the temple and background of the Buddha statues inside will greatly enhance the experience.

Some Terms to Know for Visiting Temples in Thailand

Other Things of Interest

Yes, the women who have shaved heads and white-colored robes are Buddhist nuns (Bikkhuni). Unlike Sri Lanka — another Theravada country — female devotees still cannot become officially ordained in Thailand. The same rules of no contact, even accidental brushing in a busy place, apply for the opposite sex.

The reclining Buddha statues such as the 46-meter-long one at Wat Pho in Bangkok aren’t meant to depict him as lazy. This representation is meant to capture Buddha in his last hours on earth as his body died from an illness, widely believed to have been food poisoning.

Those ratty white bracelets travelers are often seen wearing are called sai sin. They are made from a long stretch of thread blessed by monks during a ceremony. Traditionally, a blessing for good fortune and health is said while tying them on. If you receive a sai sin bracelet while visiting a temple in Thailand, don’t cut it off later unless necessary. They should be untied or left to fall off on their own when the time is right.

This article expands upon and adds additional insight to the Thailand temple etiquette content I did for Tripsavvy. 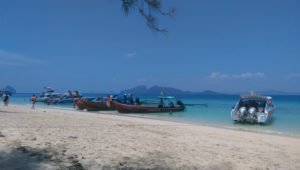 How to Travel Thailand Cheap 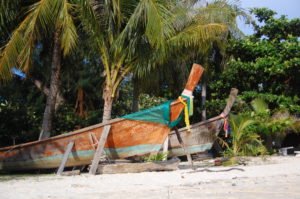