The Best Guesthouse on Koh Phangan

Ever found a place during your travels that you loved so much you wish you could find a way to stay? To forget going home, getting a proper job, and being left with only good memories?
Well, Heidi Madsen and Christina Andreasen — two Danish travelers with a love for Thailand — did exactly that!

In February 2010, the two women took a chance with no prior experience and bought the famous Same Same guesthouse in Koh Phangan, Thailand, to make their dreams come true. The risk paid off, and they are now the proud owners of one of the most popular places to stay and party in Haad Rin.

This is their true story and a good reminder that anything is possible, as long as you’re willing to give it a shot!

When did you first come to Thailand?

What made you love Koh Phangan and want to stay?

We both felt a special connection to Thailand and Koh Phangan in particular. Same Same was run by a Danish/Thai couple, and it felt special from the first time we stayed there. We both saw Same Same as our second home. The whole Koh Phangan vibe made us feel like we belonged here amongst the locals and the happy tourists. The locals here are so friendly and warm, and each time we came back we would be greeted with “hello, welcome back!!!” when we walked through the streets of Haad Rin.

How long did you travel before you stayed in Koh Phangan to work?

We both did the usual backpacking trip in Asia, Australia, and New Zealand for eight months. And we kept on coming back to Same Same and Koh Phangan each holiday we went on.

Did you ever dream that you would own a popular guesthouse one day?

We had no idea we would ever set up a business in Asia to begin with. We met each other in the bar, became friends, and fortunately we lived close to each other in Denmark. Every time we were home, all we could talk about was saving money and returning. We talked a lot about living abroad, but what to do and where to start?

One day we got an email from the former owner saying that he wanted to sell Same Same and that he wanted us to take over. A million thoughts crossed our minds! And for two months we did nothing but talk about what to do, how to get the money, and if we were ready for such a big decision. It was a big emotional roller coaster ride. Christina would say ‘yes’ one day, Heidi would say ‘no’ and then the next day the roles had changed. We had no background or education in the hotel and restaurant business.

But the day we finally had to decide, we followed our hearts. And when we said ‘yes’, it felt like the best thing we had ever decided!

Whose idea was it first to stay?

We were both hooked on the idea to live in Thailand, but we also talked about South America. So it was just a coincidence that this opportunity came along at the right time.

What went through your mind first when you knew you were going to take the leap?

We were so excited but also scared of the risk, the new life — the unknown. But we decided to focus on the positive and not to worry about what might happen and what challenges we would meet. The very first thing we did after we made the phone call and accepted the offer was to go down to the local pub, order some shots and look each other in the eyes and say: Did we really just say yes to buying a guesthouse in Thailand?!?!

What did your friends and family at home think when you told them?

Our close friends and families weren’t too excited about our decision. It meant that we would be thousands of miles apart; especially our parents were concerned about the risks of doing business in a country that is so different from the Danish society. It was very hard to do something that you knew would hurt the people you love the most, but we just had to do it and follow our dream. And after they all have been visiting us and seeing how happy we are, and that things are going well, they are happy for us. We are having such a good time together when they visit us and we have holiday together!

Were you accepted here immediately into the community as new guesthouse owners?

We were happy to be back and see familiar faces again, and because most locals knew us from earlier, it went smoothly. The main reason might be that Same Same has always been a farang [foreigner] run business, so we were accepted from the beginning.

Any unexpected challenges running a guesthouse?

There is, of course, a big cultural difference working with Burmese and Thai people. We have different standards and ways of doing things. So it’s really all about equalizing your expectations and trying to understand each others’ points of view. Also, the language barrier was difficult in the beginning. We had to earn the trust and respect from the staff.

Another challenge is that your home is a guesthouse. In a kind of way, our living room is always full of strangers. We really have to be social 24-7. Before, we were really social when we had time off from work, but now we really appreciate time to ourselves and enjoy our spare time alone or in big cities where we can be anonymous. 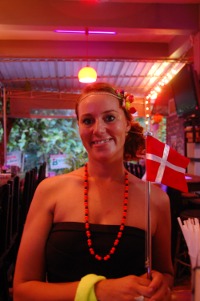 With so many Full Moon Parties in your life, what’s the craziest thing you’ve seen from a guest?

We’ve seen so much craziness! One of the things that comes to mind was when a Mexican guest thought he could fly and jumped from our roof — approximately a four-meter fall. He was very drunk, but fortunately he walked away with some scratches only.

So what about your upcoming trip to Burma?

Same Same has, in its eight years, never been closed. But in mid September we will close for two weeks to go on a trip to Burma with our staff. We are now one big family here in Same Same and since the majority of the staff are from Burma, we really want to see their country, meet their families, and experience the culture where they grew up. It’s also an opportunity for the staff — that loyal as they are, never take holiday to go home — to see their families. And we really believe that it will be a trip that will make us even closer as a team; to make new memories and and get to know each other outside of work.

Anything crazy you want to add?

Working with backpackers is an amazing job; always happy people, fun times and new stories to tell. It can sometimes be like working in a kindergarten. We have both private rooms and dorm rooms in Same Same. Last New Year one of the guests in the 16-person dorm shit himself in the bed when he was passed out drunk — not too popular with the rest of the guests! And we stopped counting how many times people are having sex in our skybar, have broken our sinks, or have fallen down our stairs.

Our night guard has so many crazy stories that he could write several books.

Same Same guesthouse in Koh Phangan has rooms and dorms. And damned good pizza. Regardless of which you choose, you’re guaranteed to meet fun people in the downstairs bar or on the rooftop.

Help out this site by using Hotels.com to book Same Same and score a free night every 10 as you travel around. You will want to stay on Koh Phangan for a while — believe me.

I stayed at Same Same Guesthouse for two weeks…this article required a lot of research.

Greg is the editor of Startbackpacking.com. He left Corporate America to begin traveling in 2005 and has been happily living from a rucksack since!

The red links in this post are affiliate. Using them helps support this site and costs you nothing!