Run for Your Lives

I fought to control my trembling hands as adrenaline rushed through my body.

I was standing with my Dutch friend in the humid darkness, shallow breaths of the jungle air filling my lungs. All my senses were tuned to the horrific scene unfolding on the streets far below me. We stood huddled together with several others on a hillside in total silence, afraid to even swat at the insects feeding on our exposed skin.

Then, the screams came.

Faint at first, and finally drowning out the sounds of the night. The noises of panic and terror drifted up to us from the brightly lit streets below. A mass of human bodies was choking down the narrow streets in our direction and fighting toward the safer, higher ground. I watched intently behind the last rank of bodies for the inevitable first wave of water…

This night on Ko Phi Phi island off the west side of Thailand had started out like any other. My friend Suus and myself had enjoyed a lazy day of lounging around in the sand and enjoying the warm, shallow sea. The Andaman was an unearthly blue color, and so tranquil that you could see the reflections of puffy white clouds crawling across its surface. In the near distance Phi Phi Leh, the uninhabited brother of our island, rose up out of the water with gray rock sides and a lush green carpet.

The scuba diving here was spectacular, life was abundant above and below the water in brilliant displays of creation. Suus and I watched the sea pull the sun under and as it drooped lower on the horizon, the water transformed from turquoise and inviting to dark and forbidding. Soon, night had doused all the pinks and oranges so we walked into the village of Ton Sai. 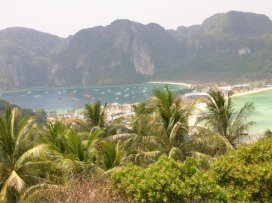 After a gluttonous dinner of sushi and rice, we walked the narrow streets in search of the party. March had brought quite a number of visitors to the tiny island and a strange brew of backpackers and suitcasers mixed uneasily in the restaurants and pubs. By backpacker standards, the island was expensive.

By one-week holiday travelers’ standards, the island was unaccommodating. The two groups seemed to meet in the middle to put aside complaints and to enjoy the amazing beauty.

It was hard to tell that a little over a year earlier, the 2004 tsunami had claimed over 2000 lives in these very streets. Over 1200 of those tourists and locals still belong to the blue depths of the Andaman.

At the time there were only 10,000 residents here, so one in five people had fallen to nature’s hand. There was not a resident on the island that survived without loosing someone close to them. Restoration was mostly complete and the only signs that anything so dark had happened were the occasional monuments and swarms of Burmese construction workers piecing the island back together like ants.

Miraculously the Thai people with their mai pen rai attitude had managed to put their famous smiles back on and welcomed us to the new island with open arms.

We chose one of the many open-aired bars that was at the end of one of the busy streets. On a crude wooden stage, a local band was playing Western covers like “Sweet child of mine” and “Summer of 69.”

The singer spoke no English, but he did a good job of mouthing the words in the same tones as the songs. Memories associated with the songs brought a smile to my face. It was around midnight, March 11th, I was sitting in middle of the Andaman sea with a good friend talking about our scuba experiences earlier, life could not have been better. A pleasant breeze was keeping the savage Thai mosquitoes at bay. A very white moon looked down at us from above….

Then all hell broke loose.

A couple of Thai men ran by the front doors of the bar. After a pause, another small cluster of people went by at full gallop. I looked across the round wooden table at Suus to see if she had noticed, and her eyes told me that she had. Both of us were watching now as more and more people ran by the front entrance. The first thought in my head was that maybe there was a fight. We were next door to a bar that boasted a regulation Muay Thai fighting ring and they encouraged tourists to climb inside and demonstrate how much liquid courage they had consumed over the evening.

My light curiosity met reality head on when two Thai girls in their twenties ran inside the entrance screaming in Thai. The doormen, both grown men, turned around and the look on their faces froze my heart.

It was a look of a man about to die.

Whatever the women had said in Thai had caused these men to turn whiter than I was and to spin on their heels and run past us into the kitchen to my left. We sat completely bewildered until the owner of the bar, approached our table with a forced calmness and said, “its time to go now friends.”

He led us quickly through the kitchen where woks of oil still gave off their hot aromas. There was a large hole cut in the wall, and a pile of concrete blocks at the bottom which provided a wobbly, crude set of stairs. I helped Suus through the hole, then I climbed through myself.

We were the last two out of the bar, and ahead of us people were running blindly up a steep hillside lit only by the same white moon I had been admiring earlier. At this point we had no idea what was going on, but our innate human instinct to stay alive told us to run.

And that is what we did. As we struggled to catch up with the locals that had been drinking with us just moments earlier, knee deep vegetation cut at our bare legs and invisible vines tried to trip us. We were already drawing the attention of insects in the brush, I knew that it was going to be a long night.

When we stopped running, we stood close to some Thai people. There were maybe a dozen or so of us on the green hillside, everyone had ears glued to mobile phones and chatted nervously with friends and relatives all over the island. A young Thai girl told us that there had been an earthquake felt in Phuket, another island a quick boat ride away. Those same tremors were the only warning that any of these people had felt before disaster had struck the day after Christmas in 2004.

The event was still obviously fresh in their minds, and the news report and calls from relatives had triggered a mass panic. Below us in the brightly lit streets, we could see dozens of people on the move. Locals and tourists alike were literally running for their lives, trying to reach the precious high ground where we now stood. I listened, but there was no siren wailing in alarm. Then again, the one in 2004 did not sound either.

When we heard the Thai girl’s explanation, I groaned in disbelief. I fought to recall news that I had heard about the last tsunami; what was I to expect? The skeptical part of myself said that the chances of another tsunami so soon were very obsolete, but then again, sometimes I wasn’t very lucky and nature worked in mysterious ways.

Suus stood next to me, her body trembling. She was stricken with fear, but bravely stayed calm. I struggled to stay focused, to get into survival mode. I remembered that many people had lost track of friends and loved ones, so I knew that we had to stick together. My mind jumped around faster than I could absorb the thoughts. First it flashed to my passport which was back in my bungalow, I cursed myself for not having stuck it inside my money belt.

I started thinking about my medical training that I had received in the Army. Maybe it would be of use while we were stranded here on the island. Then I remembered how the survivors in 2004 had waited for days to get clean drinking water and food supplies, what was my plan…?

My thoughts were interrupted by an announcement over loud speakers from the streets below. It was only in Thai, not very fair I thought to myself considering the number of tourists on the island. We looked to our Thai girl for an explanation. She said that Bangkok had confirmed that there was no wave, but we were to return to our rooms and collect our passports in case something happened.

The government didn’t exactly have a shining track record in my opinion, and the command to retrieve our passports seemed a little dodgy to me. Suus agreed and so we stayed put another dreadfully painful 30 minutes, until the last local had slowly made their way back down to the street below. Soon, we decided that taking our chances with the water would be better than feeding the insect cloud that had come to feast on us, so we trudged down the moist slope and into the village below.

The time was almost 01:30am and the streets were buzzing with activity. There was not a prayer of going to sleep after such a dose of adrenaline, and people were actually filling the travel shops to book passage off the island. They had had enough of Ko Phi Phi.

All around me travelers comforted their tearful partners. We went directly to a busy internet cafe, where I quickly checked every news website I could find. My fingers worked as fast as they could as I looked at weather radars, CNN, etc…

I never found our tsunami, the sacrifice in 2004 must have been enough to sedate the Andaman. The next day, the island was nearly deserted. I did speak to an older English couple that had stood their ground and decided not to let the scare ruin their holiday. They showed me that our night had made the London Post, and that the earthquake had been felt as far away as Indonesia. The Post also claimed that geologists were concerned over all the seismic activity in the area, so the panic had not been completely ungrounded.

The night after our scare, we ventured out to a beach party where there was an amazing fire show. I had a good time, but my eyes always went nervously back to that black water just a few meters away and I wondered when it would grow restless again. I whispered a silent “thank you” and prayed that I wouldn’t be here to find out.

Greg Rodgers is the editor of Startbackpacking.com and left Corporate America to begin traveling in 2005. He’s been happily living from a rucksack since.