A Lightweight Alternative for Tents

I found myself exploring the woods around the Trail Days festival, an annual gathering of hikers and campers along the Appalachian Trail in Damascus, Virginia. Softly treading through a needle-strewn pine forest, I unexpectedly walked up on a startling scene:

A literal village of hammocks interconnected in a matrix that involved every available tree. There must have been close to 100 people who, being solely hammock campers, had decided to carve out a space in the woods adjacent to the fields where everyone else camped in tents and vehicles.

These guys were fanatics. And devilishly friendly.

Not only did these hammock lovers prefer the company of their own species, they wanted converts; I received a passionate 30-minute lecture on the benefits of sleeping above the ground rather than on the ground. I have to admit, they made some good points, and the hammocks that they let me test were extremely comfortable.

To the uninitiated like myself, hammock camping can seem minimalist, slightly pretentious, and even a little bit expensive for such a simple contraption. But after touring the amazing, lightweight setups at Trail Days that year, I was sold and wanted to give it a shot. You generally get what you pay for.

I decided to go with the double hammock by Grand Trunk. The pricing was mid-range and I opted for the double for some additional stability and room to lay diagonally. 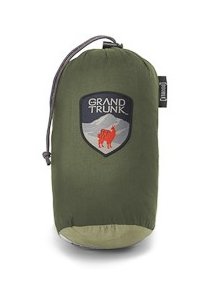 The Grand Trunk double hammock is comfortable and feels stable enough. I had my doubts about the included simple, nylon cords at first, however, it never slipped down the tree. It’s hard to relax — the idea behind being in a hammock — when you’re afraid that you could hit the ground unexpectedly at any time.

The material is triple-stitched, mildew-resistant nylon. It’s just the right thickness for durability and still being breathable so that your back doesn’t sweat.

The included marine-grade carabiners are ridiculously rugged and durable, but way too heavy. For casual camping near the car or relaxing in the back yard, the weight isn’t an issue; however, if I planned to carry the double hammock exclusively on a long trip, I would consider replacing the carabiners with some lighter climbing ones instead.

Despite weighing in at 20 ounces, the hammock is still obviously lighter and easier to rig quickly than most tents. I would need to add additional weight for a line and tarp or mozzie net to drape over top (both are also sold as add-ons by Grand Trunk).

The nylon cords are fairly minimalist. Don’t expect any fancy hardware — beyond the two heavy carabiners — or slings.

No instructions come with the hammock, but it isn’t that difficult to figure out how to hang it with the included kit. 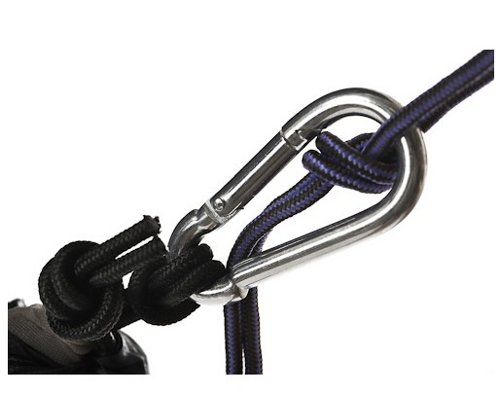 Despite the weight, the Grand Trunk double hammock comes across as a sturdy addition to my camping kit. I look forward to spending some comfortable nights cocooned inside.

Although Grand Trunk caters to travelers and “makes goods for the road less traveled,” I probably won’t be carrying the double hammock on my international backpacking trips where every ounce counts. After exploring the company’s website (http://www.grandtrunkgoods.com), I do like their philosophy and other travel products on offer.

In hindsight, for serious trips abroad, I should have opted for one of the ultralight hammock choices. Realistically, I’ll probably use the hammock as an alternative place to lounge on casual camping trips.

You can buy the Grand Trunk double hammock directly from the store on their site.

Disclosure: The author received a demo unit of the double hammock for free from Grand Trunk as coordinated by Deep Creek Public Relations.