Traveling During Bali's Day of Silence

Nyepi, the Balinese Day  of Silence, was about to begin.

And I was going nuts.

I came to Bali to go surfing, and for a week it’d been flat flat flat, as if a giant aquatic steamroller had squished the ocean so that not a single ripple broke on the reefs. Now, miraculously, mysteriously, a fun swell had appeared overnight. Perfect blue-water lines peeled along the reef in front of my Sanur beachside backpacking hostel, and all I could do was watch.

It was driving me crazy.

Today was the Balinese Lunar New Year, or Nyepi, the Day of Silence. On this day, for a full twenty-four hours, the vibrant-and-bustling resort island of Bali comes to a complete and utter standstill. The streets are empty of all cars and motorbikes. Boats remain at anchor and ferries at dock. The airport, which receives millions passengers a year, is shut down without a single flight allowed to land.

Local radio and TV stations pull their plugs. All Balinese people and other residents remain indoors. Tourists are not permitted outside the grounds of their hotels.

And surfers are not allowed to surf. All they can do is watch perfect waves. 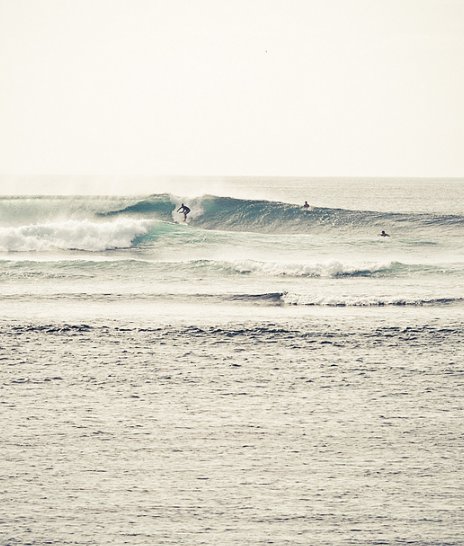 I was tempted, though. I surely was as I brooded upon my veranda. Then a traditional Balinese temple guard in his black-and-white checkered sarong appeared on his beach patrol to make sure nobody was breaking the rules. I decided the better part of discretion was to stay on the veranda. Perhaps even read a book.

Nyepi, which falls in March or early April, is kind of like a big spiritual spring cleaning to rid the island of all evil. On Nyepi itself, Balinese Hindus devote the day to fasting and contemplation, but preparations start several days earlier.

Earlier in the week, I’d tailed along after a big temple procession to the beach wherein effigies were ritually cleansed in the ocean, which the Balinese consider to be the great purifier.

Then, the previous night, I’d joined thousands of others on the Sanur streets to watch the ogoh-ogoh procession, one of the world’s most unusual parades. Ogoh-ogoh are giant bamboo-and-paper statues of demons and furies and monsters, made by village youth, and most are marvelously creative.

Demons and gods fly in the air while doing battle. The evil witch Rangda eyes a tasty maiden to gobble. A pasty ghoul lurks at the gates of a Bali villa. A snarling demon rides a Harley-Davidson while giving everyone the middle finger.

My favorite, though, was one of a crowned frog surfing a wave on a giant rubber sandal.

Then, starting at dawn and running to the next day’s dawn, everybody remains indoors. Come evening, no lights are permitted to be turned on. Street lamps are shut off. It’s a complete blackout.

For some expat residents, the Balinese Day of Silence is too much to bear. Many leave the island.

A few days previously, while browsing the internet, I came across a Bali traveler’s forum. Many posters had booked their accommodations online without being aware of Nyepi and were grumbling about losing a day. But one fellow who signed himself as Roomorama Ron said:

“Why do we always have to seize the day? For one day of the year, why don’t we just let it go, like a bird from the hand?”

As I sat upon my veranda, the waves continued to roll in, one after the other. Usually there would have been dozens of surfers riding them. But as I watched, something strange began to happen to the mood. For years of surfing, I’d been blessed by the ocean’s generosity. So, as Roomorama Ron said, why not give the ocean back its waves for a day?

Then I became aware of the bird song, of insects in the garden, the rustle of the wind. The small sounds of nature that had been before buried under the grind of traffic, the roar of big outboards, the blare of music from the beach stalls – now they gently swelled, the sounds of nature that for millennia had been earth’s song.

I thought, this is not losing a day. This is gratefully giving back a day.

The whole world should take a lesson from Bali and do the same. Nyepi, the Balinese Day of Silence, wasn’t so bad after all.

Max grew up on the beautiful island of Bali, Indonesia, before attending an international boarding school in the Philippines where he was lucky to have been given the chance to travel all over South East Asia for various sports tournaments — through which he became seriously infected with the famous travel bug.

You can reach Max by email: maxrichardson1984@gmail.com 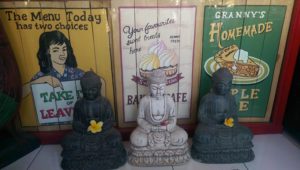 This two-minute motorbiking video by Jacob Laukitis will make you want to go! [...]