A Wildlife Encounter in Alaska

Adventure is just a romantic name for trouble. – Louis L’Amour

Two dark eyes, black as coal, stared at me from the river bank we had anchored beside of. The tall grass waved a rainbow of browns and violets in the breeze and for a tense minute there were only the sounds of the river rushing against the rubber pontoons of our raft.

Nothing but knee deep water and 20 meters of air separated me from a very large animal that had the necessary tools to swap places with me on the food chain – the same food chain which I had taken for granted as I ate my breakfast at camp that morning. I briefly pondered my options, which included finishing my half-eaten turkey sandwich, succumbing to the bear-fear and crying like a baby, or grabbing my camera and hoping for the best. 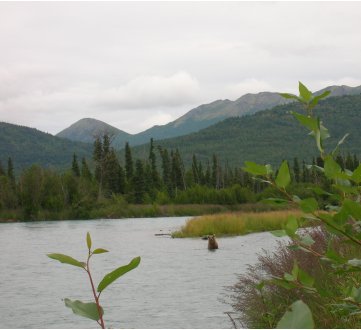 I chose to take pictures. It seems that most famous artists never saw success until they were dead anyway, so maybe this was my big break. Through a shaking lens, I watched a very large grizzly bear take a few probing steps closer in our direction. The bear was young, its shaggy coat still mostly blond, but it stood seven feet tall and was built like a Sumo wrestler on steroids.

My father and buddy from Alaska weren’t so glass-is-half-full about our given situation and had already moved behind the boat. They armed themselves with paddles in case the bear was still hungry after finishing me and my camera off.

Yes, I was in Alaska, surrounded by some of the most beautiful and untouched scenery still left on the planet. Yes, we had somehow managed to ring a grizzly’s doorbell and it now stood staring at us curiously. Oops.

Thirty tranquil minutes earlier, we had been fishing the famous Kenai River in Alaska. It was August, but the bluish glacier water was still frigid. We had floated for a full day to the mouth of Skilak Lake, as beautiful and remote as North America has to offer.

We were the only humans for miles, the only way in or out being by boat or bush plane. As we waded and fished, we spotted an area where the grass growing on the banks had been mashed flat. My sensibility must have been numbed by a cold night of camping on the lake and the lack of fish, so we decided to explore. I hopped out of the water onto the muddy bank and made a brief foray down the trail. Along the way were huge piles of scat (that’s “bear crap” for us non-biologists) and more areas where a large animal had bedded down for the night.

The place even smelled like bear. A smarter mammal would have probably recognized that as an immediate threat, yet we forged on. We were, no doubt, standing in a bear’s living room.

The trail ended back in the river, but also at the favorite fishing spot of a young brown bear. We watched for a moment as he fished to see if he was having any more luck with the salmon than we did. With my heart pounding and images of a National Geographic job offer in my head, I low-crawled through the grass like a marine sniper and began taking pictures. 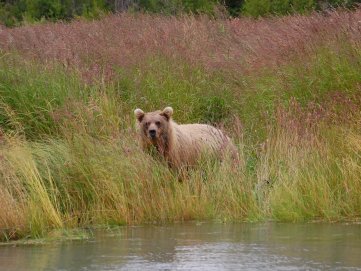 The wind shifted and the instant I felt it on the back of my neck, the bear stood up, did a perfect about-face, and locked his black eyes with mine. He gave me a surprised look that screamed, “What the heck are you guys doing here?”

I am not a bear expert, nor do I want to be, as alluring as it sounds. Spending my life freezing in the wild, trying to get a radio collar onto a gigantic and reclusive animal that could kill me in 200 creative and messy ways just doesn’t have a nice ring to it. I’m sure in Alaska it gathers more pub brownie points than telling people that I am a “writer,” but I’ll still pass.

We did not need an expert to tell us that we were probably in trouble. We quickly made a retreat back the way we came, slipping and stumbling down the muddy trail, with my buddy Skip in the lead. I glanced over my shoulder several times expecting the worst and gained an appreciation for what a gazelle on the Discovery Channel probably feels like. Before breaking through the grass into the river, Skip stopped dead in his tracks, turned around with wide eyes, and said “Go back! Go back!”. 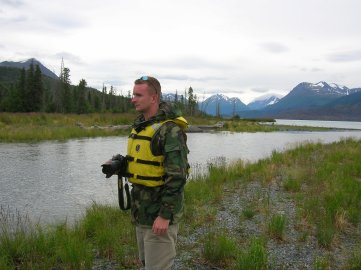 It was another bear.

First of all, anyone telling you that you need to run in the same direction that you just saw a grizzly bear is frightening. When an experienced Alaskan sportsman is telling you to do it, things really cannot be good. A second bear now stood between us and the boat – an interesting situation to find yourself in on holiday.

After waiting for what felt like an eternity between the two threats, we made a wide circle back to the river. At the raft we slowly came down from our adrenaline high, laughed hysterically, and accused everyone of being more scared than the other. We had already begun exaggerating our stories for the women at home.

I’m still not sure what it was that made me stop laughing and slowly turn around, but there he was, less than 20 meters away in the grass. Blond hair was blowing in the cold breeze and an expressionless brown face stood even with mine. Like amateurs, we had been followed.

For almost a minute, the only sounds were that of my Nikon shutter clicking, three hearts pounding, and the bear sniffing. I watched through my viewfinder as he inched closer with curiosity. It took full concentration not to drop my wobbling camera into the water.

Convinced that we looked fatty and that our screams would probably frighten the salmon too much, the young grizzly (with fully developed teeth and claws I’m sure) turned around and lumbered off into the grass with a snort. Convinced that our luck had been utterly pushed beyond limits, the three of us decided to strategically withdraw and call it even in case the young bear had second thoughts.

We shoved the raft back into the river current which would carry us home and climbed aboard still buzzing from the experience. If our brown friend had been a little older, a little grumpier, or had not just eaten his fill of salmon for the day, things might have turned out a little differently…this story would probably be written by someone else!

Greg Rodgers is the editor of Startbackpacking.com and left Corporate America to begin traveling in 2005. He’s been happily living from a rucksack since. His vagabonding blog has been alive since 2005!